Very Thai book featured as an exhibit in this exhibition of found materials that survived the fires and crackdown of 19 May 2010 at Ratchaprasong and Siam Square. The semi-charred copy of very Thai was found in a shop in the gutted Siam Theatre complex by Chat Room gallery owner Jeff Gompertz, who curated it in his segment of the Proxy show called ‘Body Doubles’, in which objects that survived the fires and were damaged by the flames and smoke – including that scorched copy of Very Thai alongside showroom dummies, melted signs and  the Siam Theatre’s vintage 7″ vinyl single of the Thai anthems –  act as stand-ins for the people damaged by the incident. 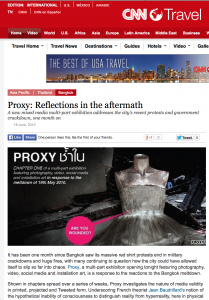 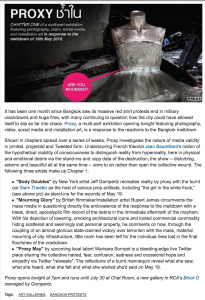 PDF of review: Proxy: Reflections in the aftermath | CNN Travel 2

Proxy: Reflections in the aftermath
A new mixed media multi-part exhibition addresses the city’s recent protests and government crackdown, one month on.
It has been one month since Bangkok saw its massive red shirt protests end in military crackdowns and huge fires, with many continuing to question how the city could have allowed itself to slip so far into chaos. Proxy, a multi-part exhibition opening tonight featuring photography, video, social media and installation art, is a response to the reactions to the Bangkok meltdown.
Shown in chapters spread over a series of weeks, Proxy investigates the nature of media validity in printed, projected and Tweeted form. Underscoring French theorist Jean Baudrillard’s notion of the hypothetical inability of consciousness to distinguish reality from hyperreality, here in physical and emotional debris via the stand-ins and copy data of the destruction, the show — disturbing, solemn and beautiful all at the same time — aims to air rather than open the collective wound. The following three artists make up Chapter 1:
“Body Doubles” by New York artist Jeff Gompertz recreates reality by proxy with the burnt out Siam Theater as the host of various prop artifacts, including “the girl in the white frock,” (see above pic) as stand-ins for the wounds of May 19.
“Mourning Glory” by British filmmaker/installation artist Rupert James circumvents the mass media in questioning directly the ambivalence of the response to the meltdown with a bleak, direct, apocalyptic film record of the debris in the immediate aftermath of the mayhem. With his depiction of towering, smoking architectural icons and looted commercial commodity hiding scattered and seemingly lost personal property, he comments on how, through the coupling of an almost glorious state-claimed victory over terrorism with the mass, material mourning of city infrastructure, little room has been left for the individual lives lost in the final flourishes of the crackdown.
“Proxy May” by upcoming local talent Warisara Sornpet is a bleeding-edge live Twitter piece sharing the collective hatred, fear, confusion, sadness and occasional hope and empathy via Twitter “retweets”. The reflections of a burnt mannequin reveal what she saw, what she heard, what she felt and what she wished she’d said on May 19.
Proxy opens tonight at 7pm and runs until July 30 at Chat Room, a new gallery in RCA’s Block D managed by Gompertz.