Thainess Made of Other Things 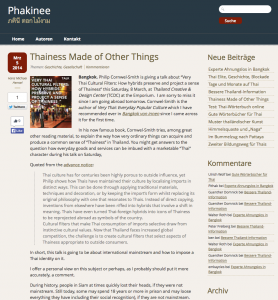 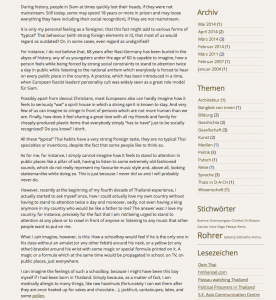 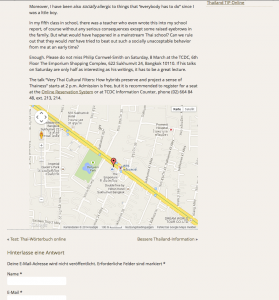 Bangkok. Philip Cornwel-Smith is giving a talk about “Very Thai Cultural Filters: How hybrids preserve and project a sense of Thainess” this Saturday, 8 March, at Thailand Creative & Design Center (TCDC) at the Emporium.  I am sorry to miss it since I am going abroad tomorrow. Cornwel-Smith is the author of Very Thai: Everyday Popular Culture which I have recommended ever in Bangkok von innen since I came across it for the first time.

In his now famous book, Cornwel-Smith tries, among great other reading material, to explain the way how very ordinary things can acquire and produce a common sense of “Thainess” in Thailand. You might get answers to the question how everyday goods and services can be imbued with a marketable “Thai” character during his talk on Saturday,

Quoted from the advance notice:

Thai culture has for centuries been highly porous to outside influence, yet Philip shows how Thais have maintained their culture by localising imports in distinct ways. This can be done through applying traditional materials, techniques and decoration, or by keeping the import’s form whilst replacing its original philosophy with one that resonates to Thais. Instead of direct copying, inventions from elsewhere have been riffed into hybrids that involve a shift in meaning. Thais have even turned Thai-foreign hybrids into icons of Thainess to be reprojected abroad as symbols of the country.Cultural filters that make Thai consumption of imports selective draw from instinctive cultural values. Now that Thailand faces increased global competition, the challenge is to create cultural filters that select aspects of Thainess appropriate to outside consumers.

In short, this talk is going to be about international mainstream and how to impose a Thai identity on it.

I offer a personal view on this subject or perhaps, as I probably should put it more accurately, a comment.

During history, people in Siam at times quickly lost their heads, if they were not mainstream. Still today, some may spend 18 years or more in prison and may loose everything they have including their social recognition), if they are not mainstream.

It is only my personal feeling as a foreigner, that this fact might add to various forms of  “typical” Thai behaviour (with strong foreign elements in it), that most of us would regard as outdated? Or, in some cases, even regard as undignified?

For instance, I do not believe that, 68 years after Nazi-Germany has been buried in the abyss of history, any of us youngsters under the age of 60 is capable to imagine, how a person feels while being forced by strong social constraints to stand to attention twice a day in public while listening to the national anthem which everybody is forced to hear on every public place in the country. A practice, which has been introduced in a time, when European fascist leaders’ personality cult was widely seen as a great role model für Siam.

Possibly apart from devout Christians, most Europeans also can hardly imagine how it feels to seriously “wai” a spirit house in which a strong spirit is known to stay. And very few of us can imagine to cringe in front of persons which are not more human than we are. Finally, how does it feel sharing a great love with all my friends and family for cheaply-produced plastic items that everybody simply “has to have” just to be socially recognized? Do you know? I don’t.

All these “typical” Thai habits have a very strong froreign taste, they are no typical Thai specialties or inventions, despite the fact that some people like to think so.

As for me, for instance, I simply cannot imagine how it feels to stand to attention in public places like a pillar of salt, having to listen to some extremely old-fashioned sounds, which do not really represent my favourite music style and, above all, looking statesmanlike while doing so. This is just because I never did so and I will probably never do.

However, recently at the beginning of my fourth decade of Thailand-experience, I actually started to ask myself once, how I could actually love my own country without having to stand to attention twice a day and moreover, sadly, not even having a king anymore in my country who would be like a father to me? The answer was: I love my country, for instance, precisely for the fact that I am not being urged to stand to attention at any place or to crawl in front of anyone or listening to any music that other people want to put on me.

What I can imagine, however, is this: How a schoolboy would feel if he is the only one in his class without an amulet (or any other fetish) around his neck, or a yellow (or any other) bracelet around his wrist with some magic or special formula printed on it. A magic or a formula which at the same time would be propagated in school, on TV, on public places, just everywhere.

I can imagine the feelings of such a schoolboy, because I might have been this boy myself if I had been born in Thailand. Simply because, as a matter of fact, I am medically allergic to many things, like raw hazelnuts (fortunately I can eat them after they are once heated up for cakes and chocolate…), jackfruit, cantaloupes, latex, and some pollen.

Moreover, I have been also socially allergic to things that “everybody has to do” since I was a lttle boy.

In my fifth class in school, there was a teacher who even wrote this into my school report, of course without any serious consequences except some raised eyebrows in the family. But what would have happened in a mainstream Thai school? Can we rule out that they would not have tried to beat out such a socially unacceptable behavior from me at an early time?

Enough. Please do not miss Philip Cornwel-Smith on Saturday, 8 March at the TCDC, 6th Floor The Emporium Shopping Complex, 622 Sukhumvit 24, Bangkok 10110. If his talks on Saturday are only half as interesting as his writings, it has to be a great lecture.

The talk “Very Thai Cultural Filters: How hybrids preserve and project a sense of Thainess” starts at 2 p.m. Admission is free, but it is recommended to register for a seat at the Online Reservation System or at TCDC Information Counter, phone (02) 664 84 48, ext. 213, 214.