Performance by Fahmi Fadzil using Very Thai as one of his book puppets. 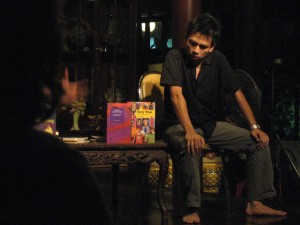 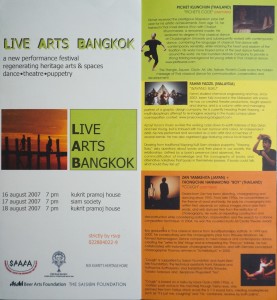 Azmyl Yunor and Fahmi Fadzil developed Wayang Buku in 2006 as a means to investigate the performance and performativity of books.

Each book represents a character in a version of traditional Malay puppet theatre, in a performance that works on multiple levels. Each static book cover represents one of the static images of a shadow puppet character from a classical epic like the Ramayana or Mahabharata. Then the interaction of the covers-as-characters provides another layer of interpretation onto the traditional story. Like a traditional dalang puppet-master, Fahmi both narrates the story and voices the characters as he manipulates the books so that their covers resemble the moving shadow puppets. The book covers are not shown in shadow, but visible to the audience in the same way as shadow puppets are often performed in front of a screen so that their coloured decoration is visible to the audience.

Fahmi chose Very Thai to represent the Tree of Life character, what the Thais call Kalapapruek, due to the multiple images in its cover design.

The production was staged by the curator/dramaturg Tang Fu Kuen in the sala pavilion built by the late author, performer and statesman MR Kukrit Pramoj in his home for the staging of khon masked dance of the Ramayana epic – a suitable location of this reinterpretation of traditional Southeast Asian performance.