Life in Phana: a small town in Isan, Thailand 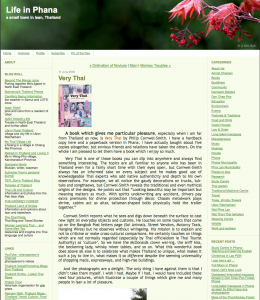 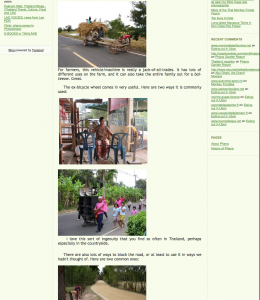 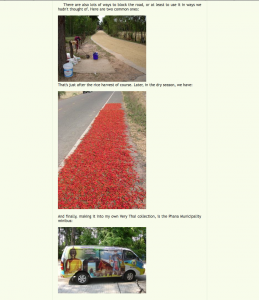 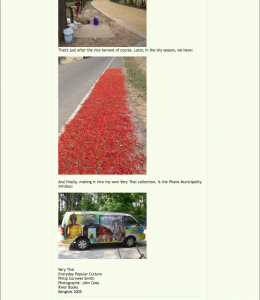 A book which gives me particular pleasure, especially when I am far from Thailand as now, is Very Thai by Philip Cornwel-Smith. I have a hardback copy here and a paperback version in Phana. I have actually bought about five copies altogether, but envious friends and relations have taken the others. On the whole I am pleased to let them have a book which I enjoy so much.

Very Thai is one of those books you can dip into anywhere and always find something interesting. The topics are all familiar to anyone who has been in Thailand even for a fairly short time with their eyes open, but Cornwel-Smith always has an informed take on every subject and he makes good use of knowledgeable Thai experts who add native authenticity and depth to his own observations. For example, we all notice the gaudy decorations on trucks, tuk-tuks and songthaews, but Cornwel-Smith reveals the traditional and even mythical origins of the designs. He points out that “Looking beautiful may be important but meaning matters as much. With spirits underwriting any accident, drivers pay extra premiums for divine protection through décor. Chassis metalwork plays shrine, cabins act as altar, talisman-shaped bolts physically hold the trailer together.”

Cornwel-Smith reports what he sees and digs down beneath the surface to cast new light on everyday objects and customs. He touches on some topics that come up on the Bangkok Post letters page (Soi Animals, Street Vendors, Motorcy Taxis, Hanging Wires) but he observes without whingeing. His mission is to explain and not to criticise or make cross-cultural comparisons. He certainly touches on things which are not normally regarded (especially by Thai officialdom ie Thai Tourist Authority) as ‘culture’. So we have the McDonalds clown wai-ing, the sniff kiss, the beckoning lady, whisky mixer tables, and so on. What this wonderful book does above all else is to celebrate what makes Thailand so unique, what makes it such a joy to live in, what makes it so different despite the seeming universality of shopping malls, expressways, and high-rise buildings.

And the photographs are a delight. The only thing I have against them is that I didn’t take them myself. I wish I had. Maybe if I had, I would have included these next four pictures, which illustrate a couple of things which give me and many people in Isan a lot of pleasure.