Stirring Up Bangkok’s most flavourful events/spots for January 2005 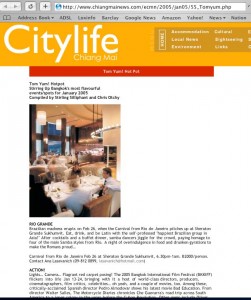 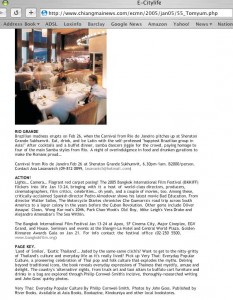 RIO GRANDE  Brazilian madness erupts on Feb 26, when the Carnival from Rio de Janeiro pitches up at Shera1 Jan 2005
ton Grande Sukhumvit. Eat, drink, and be Latin with the self-professed “happiest Brazilian group in Asia!” After cocktails and a buffet dinner, samba dancers jiggle for the crowd, paying homage to four of the main Samba styles from Rio. A night of overindulgence in food and drunken gyrations to make the Romans proud…

PAGE KEY.  ‘Land of Smiles’, ‘Exotic Thailand’… Jaded by the same-same clich?s? Want to get to the nitty-gritty of Thailand’s culture and everyday life as it’s really lived? Pick up Very Thai: Everyday Popular Culture, a pioneering celebration of Thai pop and folk culture that explodes the myths. Delving beyond traditional icons, the book reveals everyday expressions of Thainess that mystify, amuse and delight. The country’s ‘alternative’ sights, from truck art and taxi altars to buffalo cart furniture and drinks in a bag are explored through Philip Cornwel-Smith’s incisive, thoroughly-researched writing and John Goss’ quirky photos.

Very Thai: Everyday Popular Culture By Philip Cornwel-Smith, Photos by John Goss. Published by River Books. Available at Asia Books, Bookazine, Kinokuniya and other local bookstores.
LET’s ROLL! Reverse Bungee is one among many devices of self-torture available for hire at the Coca-Cola World Carnival Bangkok. The organisers dub the event, “the world’s largest funny land.” You’ll call it a good time. Located lakeside at Muang Thong Thani’s IMPACT Arena, if the traffic on the way up there doesn’t kill you, the adrenaline rush provided by the 60-odd rides and attractions certainly will. For the fainter of heart, the carnival also features a carousel, an enormous Ferris Wheel, bumper cars, games of chance, karaoke, food and beer stalls, and a wealth of amusements for the kids. Just remember to take the change out of your pockets before you board the rides.

Coca-Cola World Carnival Bangkok Until Feb 14 at IMPACT Arena Muang Thong Thani. B20/person (kids free); rides cost between B100-B300
RAGE AGAINST  THE MACHINE.  Shot entirely in Thailand, Abstracts of Industry emphasizes the horror and allure of imposing industrial machines and the ‘chaos-within-order’ of our age. American photographer Christopher Swift believes the increasing mechanisation of our lives is sold to us with promises of simplicity, yet, seen from another angle, the structure is chaotic and disorienting.

HALF MOON  RISING.  Mezzaluna is the newest and possibly the best of the three very expensive, vertically-advantaged restaurants comprising The Dome, perched on top of the 65-floor State Tower. You’d think Mezzaluna would be all about the view, but it’s turns out to be one of the most unabashedly authentic Italian restaurants in Bangkok. Matching the dizzying view is a d?cor scheme that successfully fuses contemporary subtlety with beau monde opulence. What really stands out is the policy of 100% importation of ingredients. Homegrown ingredients simply could not suffice on any of the menu’s offerings, even in simple salads like the insalatina misticanze (B350), in which rocket leaves, avocado slices, and cherry tomatoes roll off each other. You’ll quickly start noticing that subtlety defines everything on the plates, from grilled lobster (B2,900) to wagyu beef sirloin (B4.900). Prices, as you may have noticed, are not subtle… Best deal is to assemble a group of friends to splash out for one of the private rooms (set menus from a very reasonable B10,000/group of ten).

City Life is the leading city magazine of Chiang Mai