It could only happen here 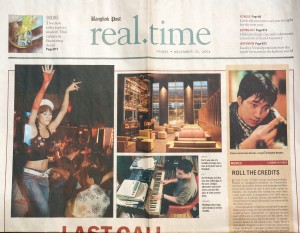 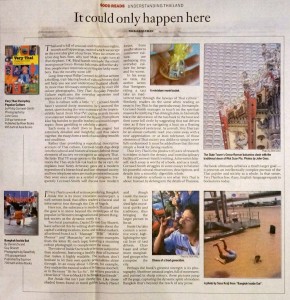 Thailand is full of unusual and mysterious sights, sounds and happenings, most of which we accept as the everyday glue of our lives. Want ice cream on a hot dog bun. Sure, why not? Make a right turn at that elephant. OK. Blind bands serenade the street; incongruous Greco-Roman balconies define the skyline; people stare into trees searching for lucky numbers. Has the novelty worn off?
Long-time expat Philip Cornwel-Smith has written a thrilling, trail-blazing book of cultural history that will help you see and understand Thailand afresh. In more than 60 essays complemented by over 250 colour photographs, Very Thai: Everyday Popular Culture explicates the everyday mysteries and expressions of Thai culture.

This is culture with a little ‘c’. Cornwel-Smith hasn’t scoured dusty museums; he’s sourced the street, questioning the very existence of the impenetrably banal (from blue PVC piping to pink tissues on restaurant tabletops) and the bizarre (from phom klao big hairdos to poodle bushes) and much larger topics (from gambling to celebrity culture).

Each essay is short (two to three pages) but extremely detailed and insightful, and thus taken together, the essays form a work of astounding breadth and erudition.

Rather than providing a superficial, descriptive account of Thai culture, Cornwel-Smith digs deep into the cultural and historical reasons behind those elements of society we recognise as uniquely Thai. He links Thai TV soap operas to the Ramayana and traces the Thai-style tuk-tuk back to the ox cart. He explains how fancy driveway gates are a modern expression of a hierarchical and face-obsessed society and how telephone wires are made prominent because they were once seen as a symbol of progress. Frequently Cornwel-Smith will discuss how modern forces, from youth culture to consumer culture, are reshaping this everyday culture for better and for worse.

In his essay on taxis, the author writes that”foreigners riding a taxi take an inadvertent tour through the byways of Thai culture.” Similarly, readers do the same when reading an essay in Very Thai. In that particular essay, for example, Cornwel-Smith manages to touch on the spiritual reasons for terrifying Thai driving habits, to historically trace the decoration of the taxi back to the boat and then come full circle by suggesting that taxi drivers steer as if they are navigating a boat on a floating marketplace of yesteryear. As a result, Very Thai can be an almost cathartic read: you come away with a new appreciation, or at least tolerance, of those elements of Thai society you dislike or simply never fully understood. It must be added here that this not simply a book for farang readers.

That Very Thai is the product of years of research is evident in both the density and interdisciplinary facility of Cornwel-Smith’s writing. As he writes himself, each essay is worthy of a book, and as a result, Cornwel-Smith struggles in some essays to balance his powerful cultural observations, descriptions, and details into a smoothly digestible whole.

But simplistic synthesis is not what Very Thai is about. Instead, by delving into the details of Thainess, the book ultimately achieves a much larger goal – it presents an intellectually complex portrait of the Thai psyche and society as a whole. In that sense, Very Thai has few, if any, English-language equals in bookstores today.

Alex Kerr
author of ‘Lost Japan’‘ & ‘Bangkok Found’
Preface to Very Thai
‘this is the book I wish I’d had when I first came to Thailand.’
[LINKS TO PREFACE DOWNLOAD]