Two Odes to the Unsung Aspects of the `Land of Smiles’

By Jennifer Gampell, in Personal Journal 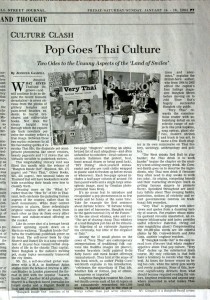 BANGKOK — What gives Thailand its groove–and will continue to do so despite the recent tsunami devastation–is never obvious from the photos of glittery temples and palm-treed beaches endemic to tourist brochures and coffee-table books. Nor does the sleazy bargirl lens through which the expatriate hack novelists perceive the country reflect a true image. Between these two mythic extremes lie all the fascinating quirks of everyday Thai life; the disparate yet omnipresent phenomena like street vendors, beauty pageants and 7-11 stores that are virtually invisible to guidebook writers.

This longstanding literary void was filled this month with the release of “Bangkok Inside Out” (Equinox, $20, 175 pages) and “Very Thai,” (River Books, $25, 256 pages), two unusual takes on Thailand that will have booksellers worldwide scratching their heads over how to classify them.

Focusing more on the “What Is” rather than the “How To” of life in Thailand, both celebrate the pulsating human aspects of the country, rather than its inert monuments. While their content overlaps in places, these refreshingly original volumes differ as much from each other as they do from every other travel- and culture-related offering on the market.

Like its cover shot of a teenage break dancer spinning upside down on a Skytrain walkway, “Bangkok Inside Out” turns the traditional guidebook genre on its head. The soft-cover book by Guy Sharett and Daniel Ziv is a zany compilation of in-your-face visual/verbal snapshots of life in the chaotic Thai capital. Since Bangkok is the nation’s melting pot, many topics necessarily transcend the city limits.

Mr. Ziv, a self-described global wanderer with a M.A. in Southeast Asian studies from the School of Oriental & African Studies in London pioneered the format in 2002 with the popular “Jakarta Inside Out.” Another SOAS graduate, Mr. Sharett is a Bangkok-based journalist for Israeli media and a linguist fluent in Thai and six other languages.

“Bangkok Inside Out” consists of 60 two-page “chapters” covering an alphabetized list of such ubiquitous — and often unfamiliar to outsiders — local customs as amulets (talismen that protect, heal, boost sexual charm or bring good luck), “DIY Dining” (do-it-yourself restaurants) and pha yen (cold cloths wrapped in plastic used to freshen up before meals or whenever). Each two-page spread includes a half-page column of around 350 fast-paced words and a single large atmospheric image, most by Croatian photojournalist Sasa Kralj.

It’s no mean feat to introduce and encapsulate a pop phenomenon in so few words and be funny at the same time. Take for example the first sentence about fortune tellers: “If fortune telling is any sort of barometer, Bangkok must be the quintessential City of the Future.” Or the one about whiskey, coke and ice: “The art of sharing cheap Thai whiskey at a loud Bangkok pub has all the ritualistic fidgeting of an elaborate Japanese tea ceremony, but little of the elegance or flair.”

Among the 17 small photos on the cover of “Very Thai” are contemporary interpretations of traditional folk customs like Buddha images (in plastic), wooden bracelets (with painted Hello Kitty faces) and monk basket offerings (miniaturized). They hint at the scope of this book which, as author Philip Cornwel-Smith explains in his introduction, “celebrates the miscellany of Thai life, whether folk or formal, pop or ethnic, homegrown or imported.”

Longtime Bangkok resident Mr. Cornwel-Smith covers each of his 65 topics in an exhaustively researched 800-1,500 words. “I wanted to get to the root of things rather than just write observations and anecdotes,” explains the British-born author, who from 1994 to 2002 edited the capital’s first listings magazine Bangkok Metro before moving on to edit Time Out’s hugely successful Bangkok city guide.

“Very Thai” rewards the conscientious reader with astonishing detail on an eclectic range of subjects like pink napkins, soap operas, ghost stories, modern shrines and truck & bus art, to name a few. Each chapter is its own minicourse on Thai history, sociology, anthropology and politics.

“The West drinks Red Bull to play harder; the Thai drink it to work harder” begins the chapter on the country’s best-selling energy drink. Mr. Cornwel-Smith goes on to describe the ingredients, why Thai men drink it (because they often need to stay awake to work two jobs), its origins, competing brands and their marketing strategies (such as getting famous singers to promote them). Sprinkled throughout are ancillary tidbits about Thai sleeping habits, patriotism, notions of celebrity and recent governmental controls on traditional folk remedies.

“Very Thai” is peppered with interviews and quotes from a daunting variety of sources. For readers whose minutia quotient remains unsatisfied, an extensive bibliography and index provides useful reference material. (Bring out your magnifying glass!) Complementing the 100,000-plus words are 500 colorful photos by Mr. Cornwel-Smith and John Goss, another longtime resident.

If “Bangkok Inside Out” is the easy-to-read hors d’oeuvre that whets readers’ appetites about Thai pop culture, “Very Thai” dishes up the substantial main course. My only criticism is that both have a tendency to overdo what they do best. At times the former verges on being too cute, while the latter gets wordy and overly academic. None of this, however, significantly detracts from what should become required reading for visitors, longtime residents and anyone anywhere interested in what makes Thailand tick.