By Natalie Bennett (now leader of the UK Green Party) 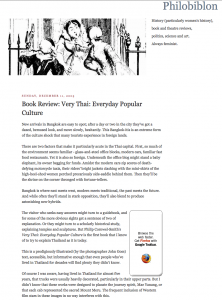 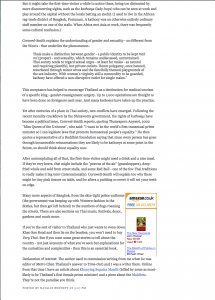 New arrivals in Bangkok are easy to spot; after a day or two in the city they’ve got a dazed, bemused look, and move slowly, hesitantly. This Bangkokitis is an extreme form of the culture shock that many tourists experience in foreign lands.

There are two factors that make it particularly acute in the Thai capital. First, so much of the environment seems familiar – glass-and-steel office blocks, modern cars, familiar fast food restaurants. Yet it is also so foreign. Underneath the office blog might stand a baby elephant, its owner begging for funds. Amidst the modern cars zip scores of death-defying motorcycle taxis, their riders’ bright jackets clashing with the mini-skirts of the high-heel-shod women perched precariously side-saddle behind them. Then they’ll be the shrine on the corner thronged with fortune-tellers.

Bangkok is where east meets west, modern meets traditional, the past meets the future. And while often they’ll stand in stark opposition, they’ll also blend to produce astonishing new hybrids.

The visitor who seeks easy answers might turn to a guidebook, and for some of the more obvious sights get a sentence of two of explanation. Or they might turn to a scholarly historical study, explaining temples and sculptures. But Philip Cornwel-Smith’s Very Thai: Everyday Popular Culture is the first book that I know of to try to explain Thailand as it is today.

This is a prodigiously illustrated (by the photographer John Goss) text, accessible, but informative enough that even people who’ve lived in Thailand for decades will find plenty they didn’t know.
Of course I was aware, having lived in Thailand for almost five years, that trucks were usually heavily decorated, particularly in their upper parts. But I didn’t know that these works were designed to placate the journey spirit, Mae Yanang, or that each cab represented the sacred Mount Meru. The frequent inclusion of Western film stars in these images in no way interferes with this.

But it might take the first-time visitor a while to notice these, being too distracted by more disconcerting sights, such as the kathoeys (lady-boys) who can be seen at work and play around the capital without the locals batting an eyelid. (I used to live in the African rag-trade district of Bangkok, Pratunam. A kathoey was an otherwise entirely ordinary staff member on one of the stalls. When Africa met Asia at work, there was frequently some cultural confusion.)

Cornwel-Smith explains the understanding of gender and sexuality – so different from the West’s – that underlies the phenomenon:

Thais make a distinction between gender – a public identity to be kept riab roi (proper) – and sexuality, which remains undiscussed, unrestrained. Thai society tends to regard sexual urges – at least for males – as natural and requiring plentiful, but private outlets. Hence polygamy, once banned, resurfaced through minor wives and the fancifully themed playgrounds of the sex industry. With women’s virginity still a commodity to be guarded, kathoey have offered a non-disruptive outlet for single males.”

This acceptance has helped to encourage Thailand as a destination for medical tourism of a specific king – gender-reassignment surgery. Up to 1,000 operations are thought to have been done on foreigners each year. And many kathoeys have taken up the practice.

Yet after centuries of a place in Thai society, new conflicts have emerged. Following the recent morality crackdown by the Shinawatra government, the rights of kathoeys have become a political issue, Cornwel-Smith reports, quoting Thanyaporn Anyasri, 2002 “Miss Queen of the Universe”, who said: “I want to be the world’s first transexual prime minister so I can legislate laws that promote homosexual people’s equality.” He then quotes a representative of a Buddhist foundation saying that since every person has gone through innumerable reincarnations they are likely to be kathoeys at some point in the future, so should think about equality now.

After contemplating all of that, the first-time visitor might need a drink and a nice meal. If they’re very brave, that might include the “prawns of the air” (grasshoppers), deep-fried whole and sold from street stalls, and some Red Bull – one of the few Thai traditions to really make it big inter (internationally). Cornwel-Smith will explain too why there might be tiny pink tissues on table, and for afters a pudding so sweet it will set your teeth on edge.

Many more aspects of Bangkok, from the skin-tight police uniforms (the government was keeping up with Western fashion in the Sixties, but then got left behind) to the numbers of dogs roaming the streets. There are also sections on Thai music, festivals, decor, gardens and much more.

If you’re the sort of visitor to Thailand who just wants to swan down Khao San Road and then lie on the beaches, you won’t need to buy Very Thai. But if you want some great stories to tell about the country – not just accounts of what you’ve seen but explanations for the curiosities and complexities – then this is an essential book.

Declaration of interest: The author used to commission writing from me when he was editor of Metro (then Thailand’s answer to Time Out) and I was a writer there. Online from that time I have an article about Khunying Supatra Masdit (billed by some as most-likely to be Thailand’s first female prime minister) and a piece about the Maldives. They’re not the paradise you think. 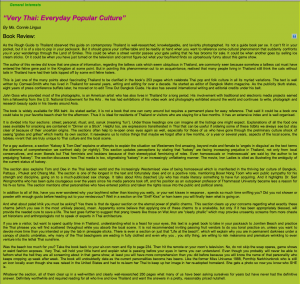