The Bangkok We Never Lost

Protesters and developers demand more, but these guides to the city and Thai culture encourage us to venture out and enjoy what we have 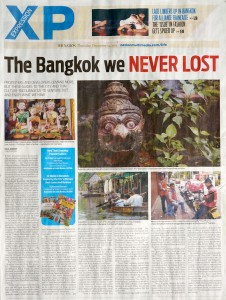 With anger further fouling the city air and the streets a din of roars and whistles, this might not be the best time to be exploring the unknown alleys of Bangkok. But two terrific books that have just come out will have you dodging the slings and arrows of our unfortunate era to track down the history already written – as opposed to the kind that’s being written as you read this.

Kenneth Barrett’s “22 Walks in Bangkok” ranks as one of the most thorough guides yet to the city’s historically important areas – and the newly refurbished “Very Thai” can be its ideal companion in your travelling pack. The updated and extended second edition of Philip Cornwel-Smith’s popular and influential 2004 original is just as much a must-have resource, thanks to his encyclopaedic knowledge and charming explanations about all the sights and experiences you encounter in Thailand. Again, it’s replete with hundreds of great photos by John Goss, Cornwel-Smith and others.

Of course the current political demonstrations – anti-government and pro – have never come close to blanketing the metropolis. Barrett touches the fringes of a couple of hot spots, and both books allude in passing to Thaksin Shinawatra and his legacy, but there are still plenty of places free of discontent where you can poke around for evidence of Teochew civilisation (see Barrett) and perhaps a plastic bag of refreshing flavoured sugar-water with shaved ice (see Cornwel-Smith).

In fact the first few of the 22 Walks ramble through Thonburi, remote and relatively peaceful on the other side of the big water.

Barrett’s journey begins when Thonburi was anything but peaceful. Following the downfall of Ayutthaya’s King Narai in 1688, Siamese cannonballs hurled across the river to demolish the French fort he had allowed to be built in the swamp that grew up to be Bangkok. A century later Thonburi was Siam’s capital.

Three more centuries further on, you can still spot homes there that have four wooden pillars in the doorway – which can only be removed from the inside. That’s how the original Chinese immigrants “locked the door”, explains Barrett, a veteran journalist.

And completely hidden behind the Klong San District Office is a remnant of Pong Patchamit Fort, one of five that King Rama IV built to shield his capital from invaders. Still standing is a mast on which flags were once hoisted to indicate which trading vessels were present – and later to report the weather.

Not far away, down Soi Lat Ya 17, Barrett found a seven-metre-long stone sculpture of a Chinese boat called a yannawa perched among old timbered houses. With a bodhi tree as a mast, this is an ancient shrine recalling the arrival in Thailand of Buddhist monks from Japan and China.

One of the most intriguing of Bangkok’s many intriguing areas is Bang Krachao, the vast “pig’s stomach” of land around which the Chao Phraya River swirls, which continues to be a great green lung (to mix anatomical metaphors) despite covetous commercial intentions.

Barrett sets out from the Presbyterian Samray Church, a 1910 replacement for the 1862 original, chronicling the missionaries’ story as he goes, and then has a look for what’s left of venerable Chinese rice mills. He glimpses a gilded Captain Hook and David Beckham among the artwork at Wat Pariwat next to the Montien Riverside Hotel.

Just as interesting is the Mon community that since the fall of Ayutthaya has dominated this district, further down the Phra Pradaeng Peninsula. The Mon, fierce fighters in combat, came to man the forts that King Rama I built there.

To any Bangkok resident who’s never been there, it’s impossible to imagine, somewhere in among all this concrete, “a huge area of green countryside in which quiet villages snooze down peaceful lanes”. Barrett explores “orchards, jungle, mangrove swamps and hidden temples” – and with amusement comes across the more recently inaugurated Bang Nam Pheung Floating Market, a nod to tourists, but mainly Thai tourists.

“There is no police station. You will look hard to find an ATM … The modern city is only a ferryboat ride away, but there is no hurry to travel back across the water.”

In urban Thailand and in rural Thailand, you couldn’t have a better “dictionary” than “Very Thai”, and it’s easy to imagine Cornwel-Smith strolling alongside Barrett, quizzing the locals about what they’re up to. “I try to be the open-minded ‘flaneur’ – the wandering seeker of raw experience,” writes the chronically curious former editor of Bangkok Metro magazine.

“Very Thai” explains a great deal about amulets and magic tattoos, taxi altars, luk thung, beauty pageants, katoey life, ubiquitous uniforms, edible insects and the lore of the motorcycle-taxi stand. For farang, it’s magical in its own way – although, as Pracha Suveeranont, “an expert on visual culture”, points out in an afterword, the first edition of the book became a hit with Thais too, an aid in celebrating their culture for fun and profit.

But clearly it was badly in need of updating, Cornwel-Smith writes. Since 2004, Thai pop has “gone inter” and Apichatpong Weerasethakul triumphed at Cannes. Asean is about to blossom. We’ve got those plastic kitschy but undeniably purposeful hand-clappers and foot-clappers now (the whistles will have to wait for the next edition).

And virtually everyone in Thailand has “gone virtual”, not least the fashion-plate hero of Facebook, Mae Baan Mee Nuad (Housewife with a Moustache), who’s also featured here. The social media are rampant in Thailand. In 2012 there were more snapshots posted on Instagram from Suvarnabhumi Airport and Siam Paragon than from New York’s Times Square. “Digital media actually suit the Thai character,” the author says. “Local websites collide multiple diversions as discombobulating as their predecessor, the temple fair.”

Then, digging deeper, he adds, “The difference this new medium makes is that we can now see through the former taboos.” Cornwel-Smith displays a keen if subtle passion for the country’s politics, at least in the way it affects popular culture. In addressing the difficulties of nailing down the nature of Thainess, he says, “The recent politicisation of Thais at all social levels has made discussion more open, direct and heated. As censorship grows futile, we all now know so much more how this country works. The official version has lost its monopoly.”

In another informative chapter, on the rise of “Thai Thai” – which he calls “vernacular Thainess [with] a hint of both essence and exaggeration” – Cornwel-Smith tackles the vexing issue of Thai exceptionalism with his exquisite sense of balance. He cites the frequently heard insistence that foreigners can never fully understand Thai ways, and then demonstrates how “the accusation fires both ways”.

These two books serve to reassure readers, both Thai and farang, that there is nothing to fear, scorn or being ashamed about, in either stoic tradition – or in Bangkok’s immediate future.

22 Walks in Bangkok: Exploring the City’s Historic Back Lanes and Byways
By Kenneth Barrett
Published by Tuttle / Periplus, 2013
Available at Asia Books, Bt396 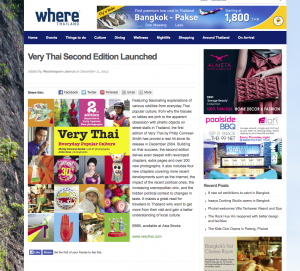 Featuring fascinating explanations of various oddities from everyday Thai popular culture, from why the tissues on tables are pink to the apparent obsession with phallic objects on street stalls in Thailand, the first edition of Very Thai by Philip Cornwel-Smith has proved a real hit since its release in December 2004. Building on that success, the second edition delves even deeper with revamped chapters, extra pages and over 200 new photographs. It also includes four new chapters covering more recent developments such as the internet, the impact of the recent political crisis, the increasing cosmopolitan chic, and the hidden political context to changes in taste. It makes a great read for travelers to Thailand who want to get more from their visit and gain a better understanding of local culture.

B995, available at Asia Books. 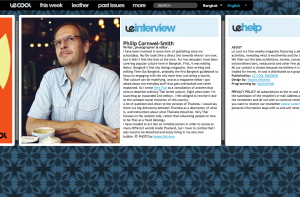 I have been involved in some form of publishing since my schooldays. My life looks like a direct line towards where I am now, but it didn’t feel like that at the time. For two decades I have been covering popular culture here in Bangkok. First, it was editing Metro, Bangkok’s first city listings magazine, then writing and editing Time Out Bangkok, probably the first Bangkok guidebook to focus on engaging with the city more than just being a tourist.
Thai culture can be mystifying, and as a magazine editor I got asked about the everyday stuff that gets overlooked and never explained. So I wrote Very Thai as a compilation of answers that aims to describe ordinary Thai street culture. Eight years later I‘m launching an expanded 2nd edition. I felt obliged to rewrite it due to the constant social evolution of this country. END_OF_DOCUMENT_TOKEN_TO_BE_REPLACED

Getting Settled: Learn about Thai culture 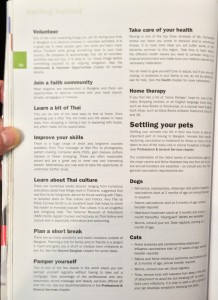 “Very Thai by Philip Cornwel-Smith is an excellent that helps to orientate the reader to everyday popular Thai culture; it is an insightful and intriguing read”

The Freedom of the City

Interview with Lawrence Osborne, author of ‘Bangkok Days’ and ‘the Wet & The Dry in Bangkok Post by Brian Curtin 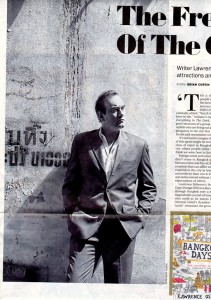 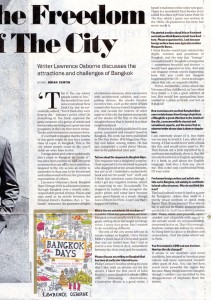 Q: Please discuss any writing on Bangkok that has been of particular interest to you.
‘Philip Cornwel-Smith is writing in a way that I like, with an electric eye for the streets. I liked the first novel of John Burdett’s series, Bangkok 8, which is filled with interesting observations. Christopher Moore is a good writer. I haven’t read most of the other noir guys. There is a wonderful aul Bowles story called ‘you have Left Your Lotus Pods on the Bus’, which I guess was written in the 1960s. He planned to live here, but never made it.’