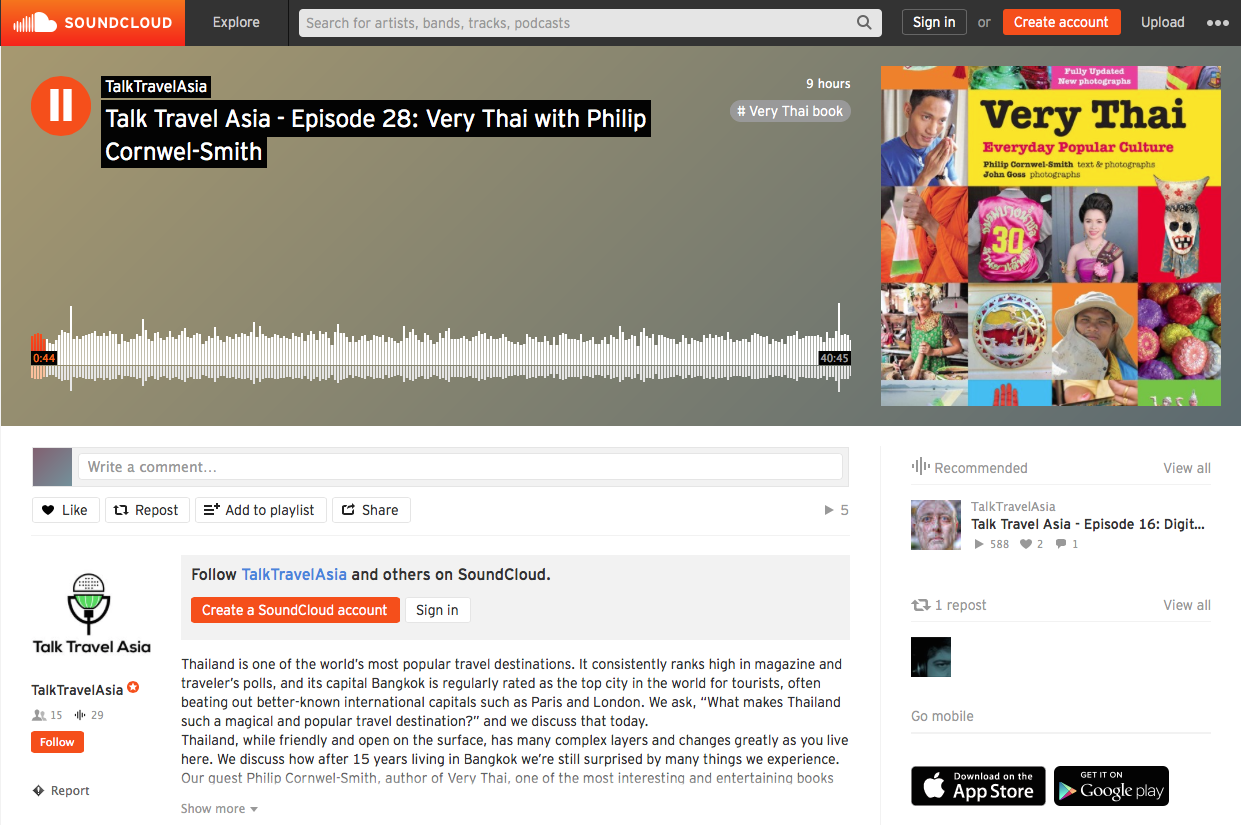 ‘Very Thai’ continues to spark media coverage. The latest is a podcast on TalkTravelAsia. The podcast is an interview with author Philip Cornwel-Smith by journalist Trevor Ranges and Scott Coates, who was co-founder of the bespoke travel agency Smiling Albino.

The podcast is available through the following channels: 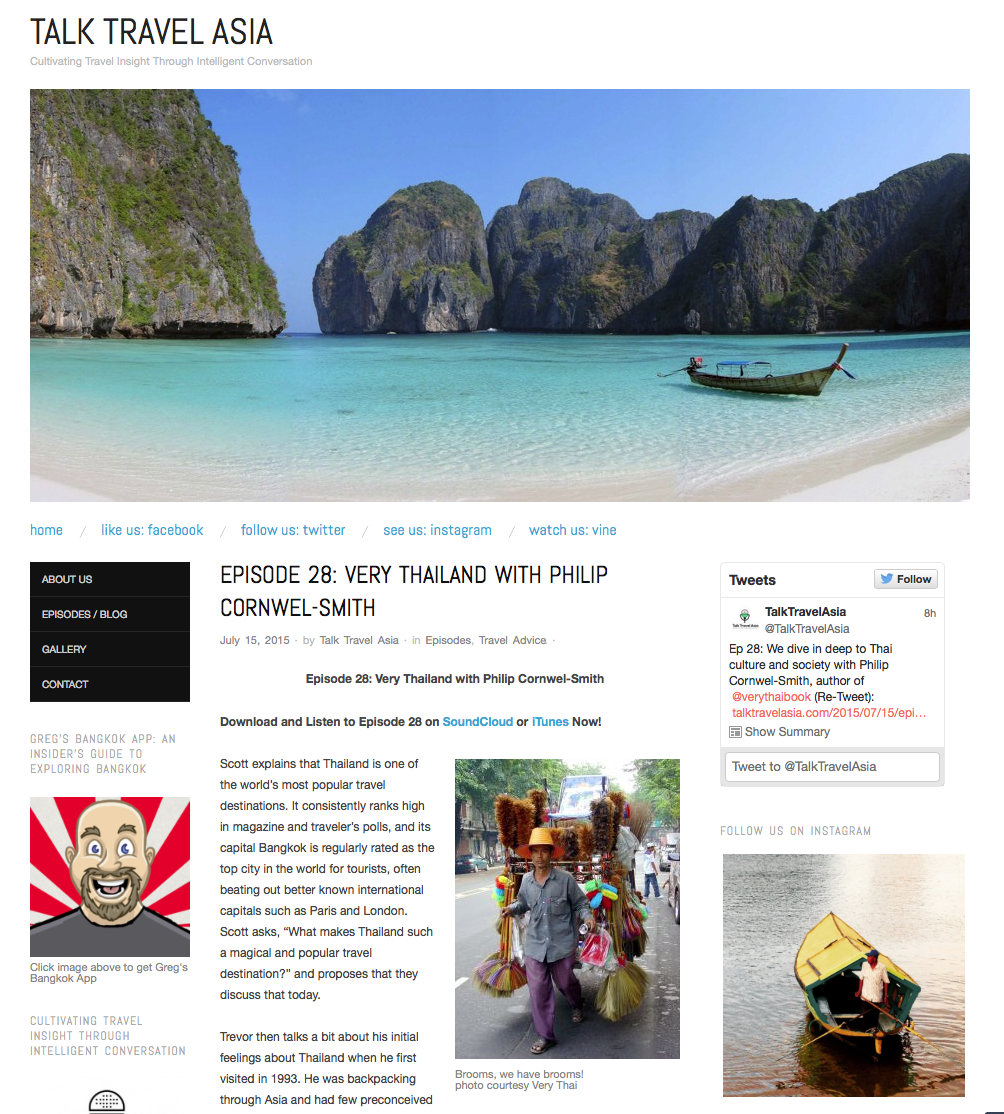 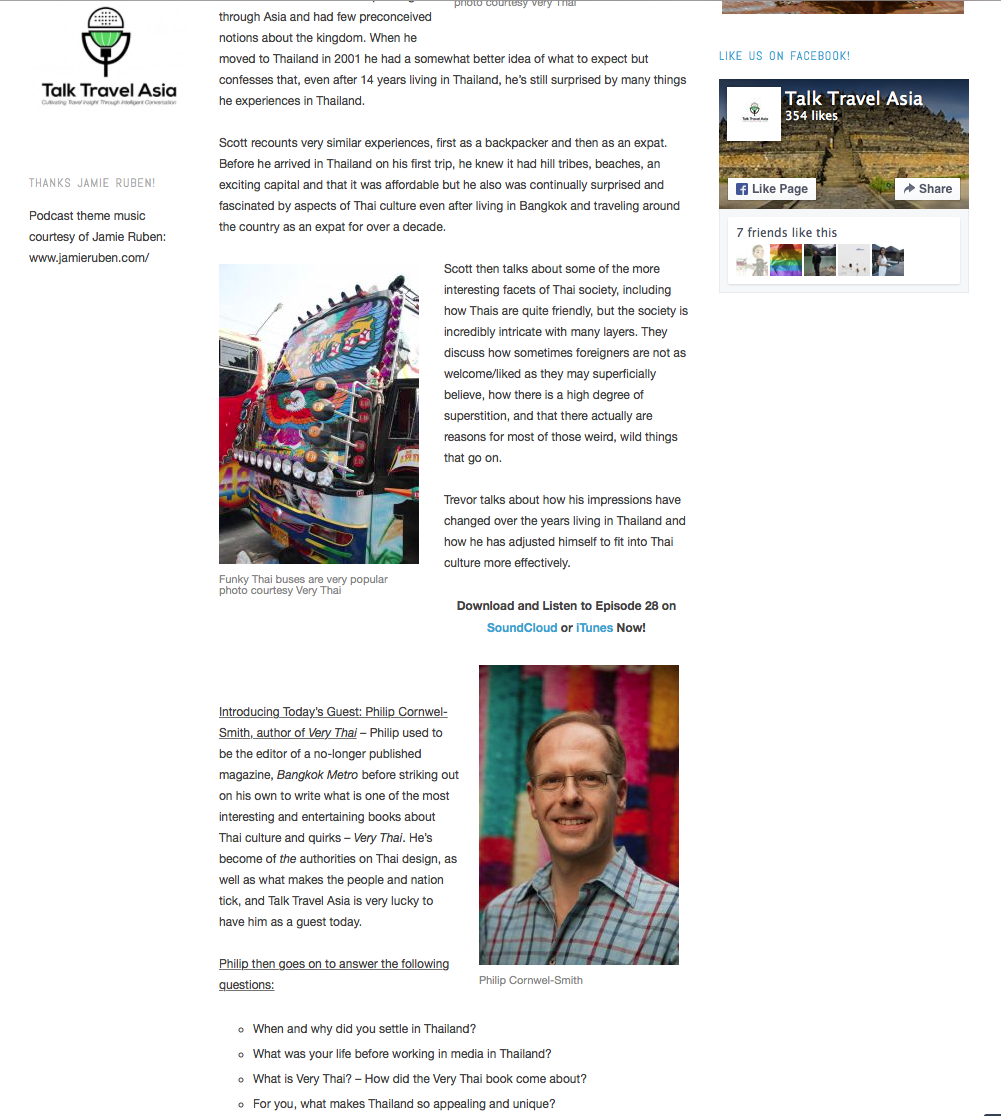 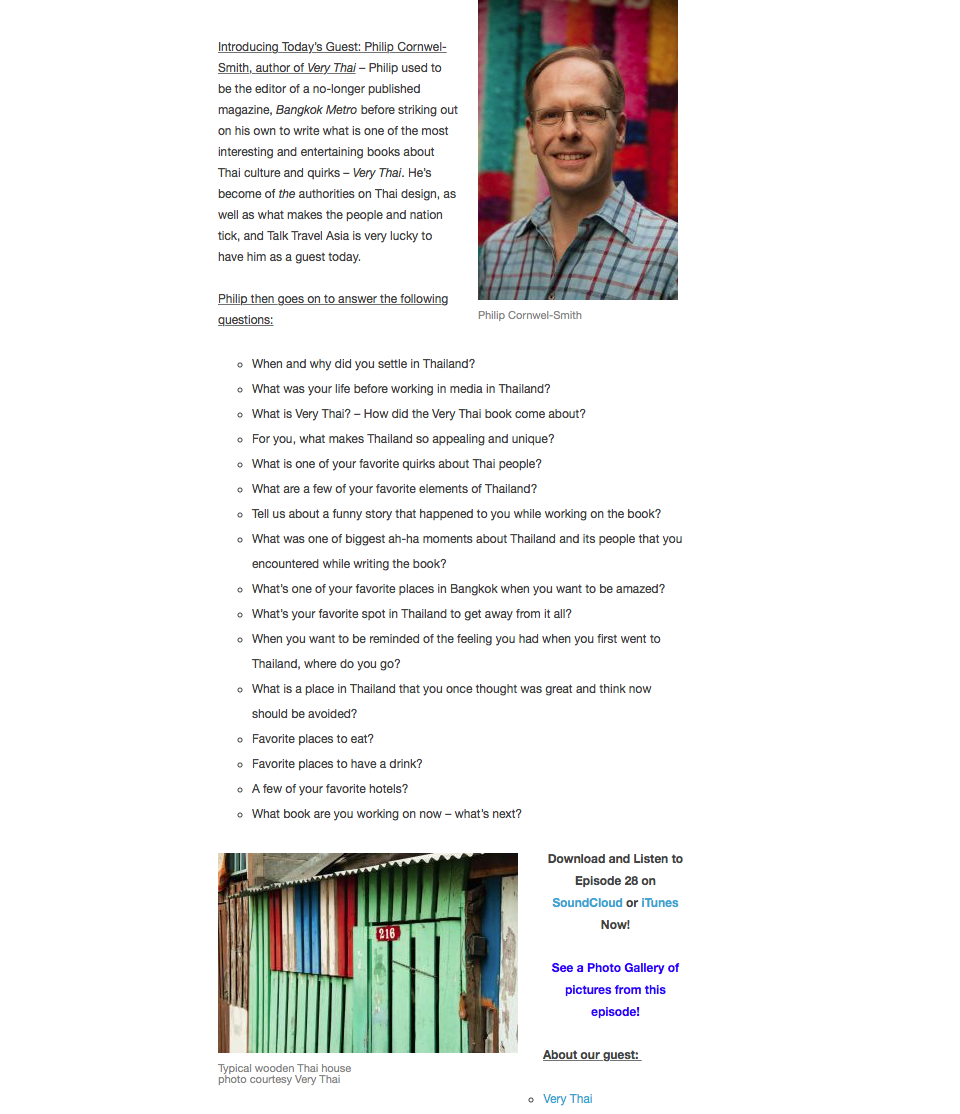 A roundup of Bangkok’s art and creative scene, with one of the quotes from yours truly. Thanks for doing this David Fernández, we need more coverage for Bangkok’s arts to flourish. The article’s done for the Asia Europe Foundation, which could explain why the title sounds like bureaucratic filing system category: ‘By people / In cities: Bangkok | city profile’. File Bangkok under ‘Creative’. 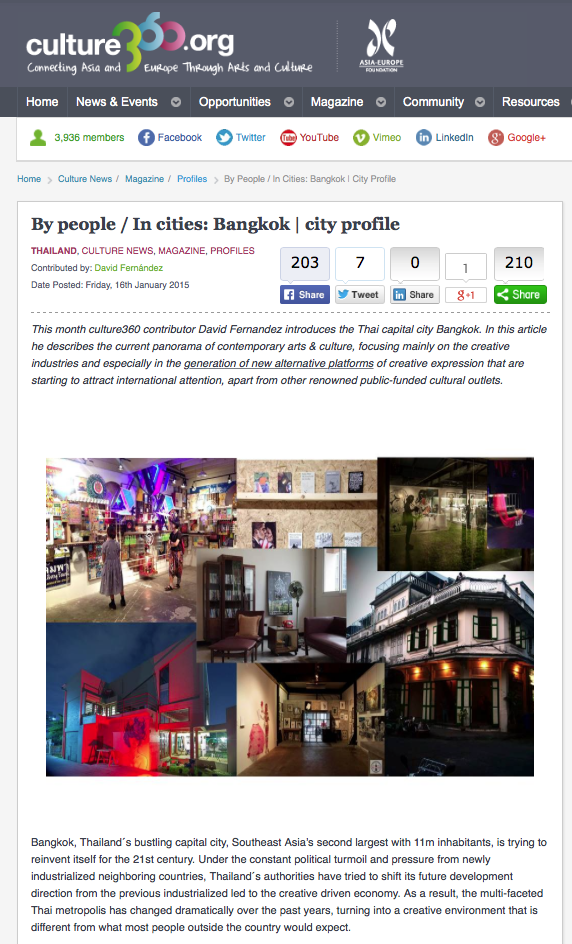 Very Thai: Street, Style and Society in the Kingdom

How a book by a Bangkok-based British author came to embody a shift in Thai cultural consciousness.

Thailand has faced a public relations crisis in recent months. The May 22 coup and the recent murder of two British tourists has cast a shadow over the sunny “Land of Smiles“ image of golden temples, graceful dances and saffron robed monks carrying alms bowls.

But neither political turmoil nor idealized cultural traditions reflect the reality of daily life as it is lived by ordinary Thai citizens. Discovering what really makes the nation tick was precisely the goal of veteran Bangkok-based British journalist Philip Cornwel-Smith when he set out to write his enlightening, encyclopedic and entertaining book, Very Thai: Everyday Popular Culture, now in its second edition.

Drawing on a wealth of insight from experts on history, anthropology, sociology and design; and generously illustrated with colorful photographs taken by Cornwel-Smith and American photographer John Goss, the book examines everything from aesthetics to folk arts.

Most significantly, it does so without succumbing to clichés or dwelling on the seedier side of life in Thailand, as exaggerated by media and bar-girl fiction. “The aim of my book was specifically to avoid those sensationalist things and to focus on topics that didn’t get looked at seriously,” Cornwel-Smith told The Diplomat. “I wanted to give a refreshing look at Thailand, to explain ‘low status’ or ‘realistic’ aspects of Thai culture. Not wholly modern, not wholly traditional – these are the criteria for things in the book.”

While a book that shuns hackneyed ideas about the kingdom’s beguiling culture would unsurprisingly be of interest to foreigners, Very Thai struck a chord with the Thai public as well. In the years following the release of its first edition in 2004, the book came to symbolize a shift in Thai society, which was on the cusp of a cultural awakening.

“The book came out at a time when the popular culture just started to become legitimized within the broader culture,” Cornwel-Smith says. “It wasn’t counted as ‘culture’ until that point. Ideas of ‘righteousness’ and ‘prestige’ were part of the official culture. Street life didn’t really fit into that. But it’s unambiguously a form of culture.”

Indeed, street food stalls, motorcycle taxi drivers in multi-hued jackets, cats nibbling on fruit offerings at a shrine, a dog panting in the shade next to a pile of coconut shells, a jumble of power lines sagging above a man dozing on a concrete bench just a few feet from the road where hot pink taxis and tuk-tuks (auto-rickshaws) zip by – these are the common street vignettes that Very Thai accounts for, in impressive detail.

And while the book begins on the street, it goes on to explore all facets of life in Thailand. It is divided into five sections: Street, Personal, Ritual, Sanuk (“fun” in Thai), and Thainess. (It is notable that an entire section is devoted to fun.) The eclectic approach was a natural choice for Cornwel-Smith who says, “I had already been looking at the culture in a pixelated way…doing a city listings magazine and putting together Time Out Bangkok guide.”

Other mysteries of the mundane that are explored include quirkily groomed “poodle bushes,” garishly decorated tuk-tuks and trucks, fairy lights, Greco-Roman building facades, the tiny pink napkins found on restaurant tables nationwide, and meticulously coiffed “hi-society” socialites who “actively seek face, invent face, even leverage borrowed face (by borrowing gems),” Cornwel-Smith writes. The book also offers insights on beliefs close to the heart of the nation, from ever-present royal family portraits and the astrological importance of colors to magic tattoos and fortune telling.

Some folk beliefs explored in the book – certain aspects of amulet culture, mediumship and shamanic practices to name a few – still carry a whiff of taboo. But attitudes around these topics are softening, at an alarming speed in some cases.

“The transition of popular culture being accepted within Thailand happened very quickly,” Cornwel-Smith says. An example can be seen in the way tattoos have achieved a higher degree of acceptance in society within a short period. “The social context around tattoos has really changed since the first edition of the book (launched in 2004),” Cornwel-Smith says. “Tattoos are now much more acceptable, partially due to Angelina Jolie getting one.”

Thanks to its diversity of topics, street cred, and striking design, Very Thai has “gone beyond its creators,” Cornwel- Smith says. “It became a source book for those working in design, products, events, theater, among other kinds of work.”

Yet, the book’s reach does not end with the creative class. “They at the cutting edge put it out into culture, which has gradually made it mainstream.”

In a testament to the explosion in soi culture’s popularity, it now forms the basis of a popular theme park, Ploen Wan, which opened in a resort town in recent years. Geared towards Thai visitors, Ploen Wan “includes things like local transportation, old barbershops, general stores, pharmacies…        ‘retro’ stuff,” Cornwel-Smith explains. This form of “retro heritage” even carries a widely known slang epithet now – “Thai Thai” – coined by Suveeranont, who points to Very Thai as an emblem of this sensibility.

Ploen Wan is a physical manifestation of the Thai Thai boom, but a wider following has formed around the book online, where fans are exploring its themes further. “The Internet is a major part of the national discussion around culture taking place in Thailand now,” Cornwel-Smith says.

The Very Thai website serves as a portal on the topic. It features a blog and streams social media postings that use the #verythai hashtag in Instagram, Tumblr, Twitter, and Facebook. “These are posted not just by me but by fans of the book’s subject and aesthetic. These hashtags were actually started by fans of the book.”

In some cases, the book itself has been used as a cultural artifact, having appeared in several art exhibitions in Bangkok, Chiang mai, Brussels and Barcelona. It has also been turned into a video installation, formed the basis of a mime production and has even been physically performed with as a puppet on stage, Cornwel-Smith explains. “There are so many ways in which Very Thai has become a cultural phenomenon in its own right.”

How could a book exploring such simple aspects of a culture have such a far-reaching impact in such a short time? Suveeranont sums it up best He wrote in the afterword to the second edition of the book: “The reason is that it reflects a mood, appearing at a time when Thai society began to debate the nature of ‘Thainess’… Cornwel-Smith’s book thus operates at the much wider level of a phi meuang, or Zeitgeist – the ‘spirit of the age’… This book enabled Thais to appreciate that ‘very Thai’ things, which were seen as low-brow, had been part of Thainess all along.” 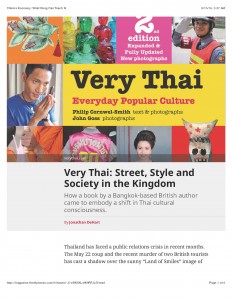 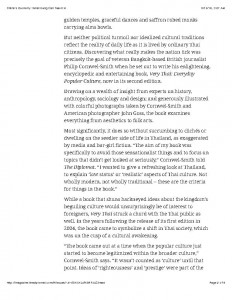 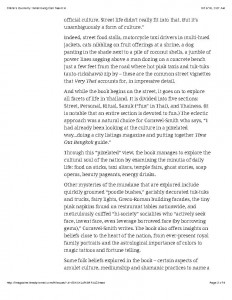 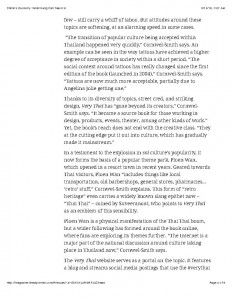 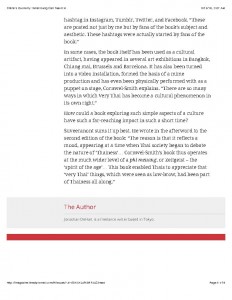 Fah Thai is the inflight magazine of the boutique carrier Bangkok Airways. This feature appeared in its section called The guide: Thailand in the May/June 2014 issue. 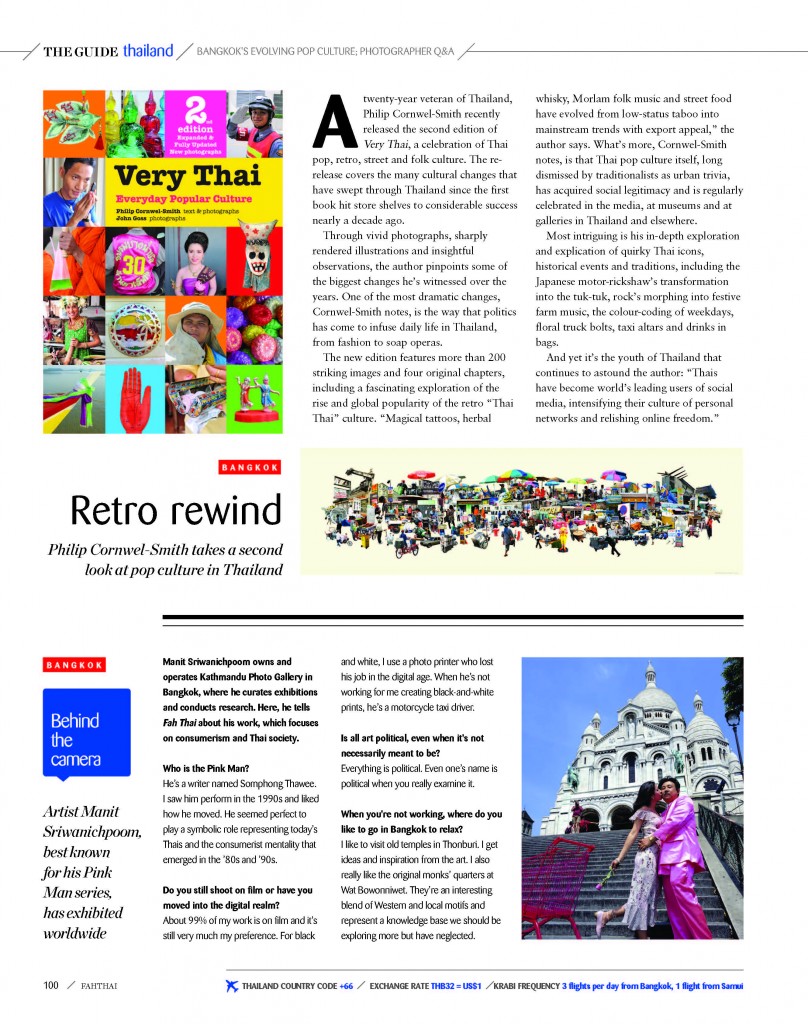 A twenty-year veteran of Thailand, Philip Cornwel-Smith recently released the second edition of Very Thai, a celebration of Thai pop, retro, street and folk culture. The re-release covers the many cultural changes that have swept through Thailand since the first book hit store shelves to considerable success nearly a decade ago.

Through vivid photographs, sharply rendered illustrations and insightful observations, the author pinpoints some of the biggest changes he’s witnessed over the years. One of the most dramatic changes, Cornwel-Smith notes, is the way politics has come to infuse daily life in Thailand, from fashion to soap operas.

The new edition features more than 200 striking images and four original chapters, including a fascinating exploration of the rise and global popularity of the retro ‘Thai Thai’ culture. “Magical tattoos, herbal whisky, Morlam folk music and street food have evolved from low-status taboo into mainstream trends with export appeal,” the author says. What’s more, Cornwel-Smith notes, is that Thai pop culture itself, long dismissed by traditionalists as urban trivia, has acquired social legitimacy and is regularly celebrated int eh media, at museums and at galleries in Thailand and elsewhere.

Most intriguing is his in-depth exploration and explication of quirky Thai icons, historical events and traditions, including the Japanese motor-rickshaw’s transformation into the tuk-tuk, rock’s morphing into festive farm music, the colour-coding of weekdays, floral truck bolts, taxi altars and drinks in bags.

And yet it’s the youth of Thailand that continues to astound the author: “Thais have become the world’s leading users of social media, intensifying their culture of personal networks and relishing online freedom.” 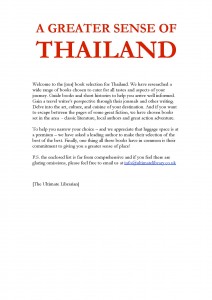 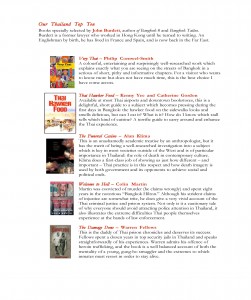 A colourful, entertaining and surprisingly well-researched work which explains exactly what you are seeing on the streets of Bangkok in a serious of short, pithy and informative chapters. For a visitor who wants to know more but does not have much time, this is the best choice I have come across.