Another guide to life in Thailand, but not the usual “which bus to catch” and “don’t mess with the servants”, but a hard-cover guide to the everyday, but oft unfathomable, life and times in Thailand. Written by Philip Cornwel-Smith, a writer with much experience in this country, and photographed by John Goss, Very Thai – Everyday Popular Culture (ISBN 974-9863-00-3) was published this year by River Books in Bangkok.

In Alex Kerr’s preface to the book, he writes, “A hundred things which had intrigued me for decades became clear on reading it (the book). Such as where the statue of the beckoning lady came from, or why the alphabet always appears with pictures.” That introduction alone was, for me, the ‘beckoning lady’ to look further! END_OF_DOCUMENT_TOKEN_TO_BE_REPLACED

A crash course in cultural orientation is the first introduction to Thailand that American Peace Corps volunteers get when they arrive in the kingdom. High-society ladies of noble standing teach them that Thai girls are very shy and conservative.
They spend their entire adolescence cooking food, cleaning their houses, and, for relaxation, painting umbrellas. Every young woman is a virgin until she gets married to a hardworking man, who is deeply devoted to traditional Asian family values. The reality confronting the young Americans when they arrive in a small village in the Northeast, therefore, comes as a shock. Half the teenage girls are either single mothers or pregnant, and their boyfriends have escaped their responsibilities and fled to Bangkok. Every married adult, man or woman, seems to be having an affair with somebody else. Family relations in rural Thailand can, in fact, be even more confused and bewildering than in America’s inner cities.

END_OF_DOCUMENT_TOKEN_TO_BE_REPLACED

New book about Thailand behind the façade 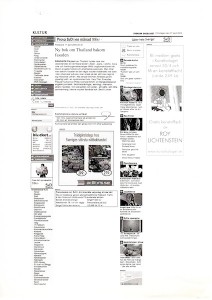 Superficially, Thailand may appear more Westernised than most other countries in Asia. Jeans, T-shirts, Coca-Cola and hamburger joints belong to the youth culture here, like English football and American pop music. But there’s something very Thai behind the façade not only in the indigenous culture but also in the way in which the Thais absorb outside influences. All those phenomena are explained splendidly in a new book, Very Thai: Everyday Popular Thai Culture by Philip Cornwel-Smith, a Bangkok-based English journalist. Beauty contests, astrology, taxi altars, belief in ghosts and spirits are all put in their proper context in this very readable book.

Svenska Dagbladet is a Swedish newspaper 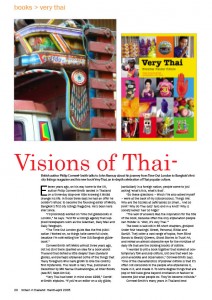 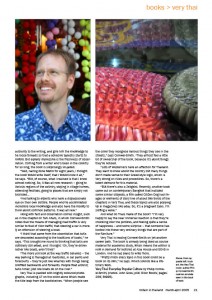 Eleven years ago, on his way home to the UK, author Philip Cornwel-Smith landed in Thailand on a three-day stop-over little knowing it would change his life. In those three days he had an offer he couldn’t refuse: to become the founding editor of Metro, Bangkok’s first city listings magazine. He’s been here ever since.

“I’d previously worked on Time Out guidebooks in London,” he says. “And for a listings agency that supplied newspapers such as the Guardian, Daily Mirror and Daily Telegraph.

“The Time Out London guide was the first publication I worked on, so things have come full circle, because I‘m now editing the Time Out Bangkok guidebook.” END_OF_DOCUMENT_TOKEN_TO_BE_REPLACED

Thank you, your Thai-ness

Mysteries of the Siamese landscape marvellously revealed, with all due affection – and affectation
By Paul Dorsey

Alex Kerr, earning his accreditation herein as an “Asia pundit”, says it best in the foreword to Very Thai: “This is the book I wish I’d had when I first came to Thailand.” It is truly so much better than any other “guide” (once you’ve got all the maps and hotel listings in your pocket).