London has its black cabs, Venice its gondolas, and Bangkok its tuk-tuks, but Thailand’s iconic three-wheeled taxis are going global as foreigners scramble to pick up a piece of Thai culture.

The smoke-belching motorised rickshaws can now be seen plying Britain’s seaside towns, Canada’s golf courses and Tokyo’s neon-lit streets, and manufacturers have seen a surge in global sales and recognition.

“Japan they have Toyota, they have Nissan, so Thailand has a car also — a tuk-tuk,” says Anuwat Yuteeraprapa, owner of Expertise, a tuk-tuk manufacturer which exports 95 percent of its vehicles abroad. END_OF_DOCUMENT_TOKEN_TO_BE_REPLACED 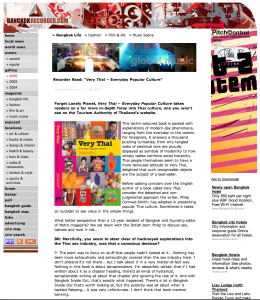 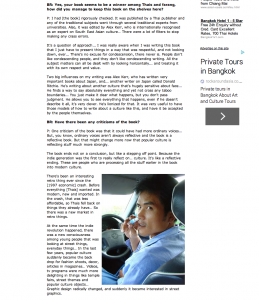 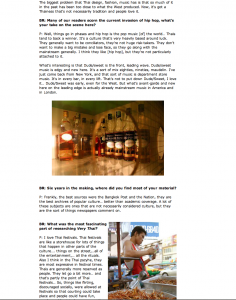 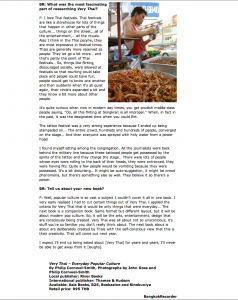 This Technicolored book is packed with explanations of modern-day phenomena, ranging from the everyday to the cosmic. For foreigners, it answers a thousand puzzling curiosities, from why tangled webs of electrical wire are proudly displayed as symbols of modernity to how whisky tables reinforce social hierarchy. Thai people themselves seem to have a more bemused attitude to Very Thai, delighted that such recognizable objects are the subject of a best-seller.

Before casting cynicism over the English author of a book called Very Thai, consider the detached and non-judgmental approach the writer, Philip Cornwel-Smith, has adopted in presenting popular Thai culture. Sometimes it takes an outsider to see value in the simple things.   What better perspective than a 12-year resident of Bangkok and founding editor of Metro magazine? We sat down with the British-born Philip to discuss sex, tattoos and rock ‘n roll…    END_OF_DOCUMENT_TOKEN_TO_BE_REPLACED

http://news.yahoo.com/s/afp/thailandpolitics
BANGKOK (AFP) – A little more than a week ago, Bangkok was at a standstill caused by daily political rallies. But judging by the crowds snaking through the Thai capital during the Songkran water festival, nothing could now be further from most people’s minds.
Bangkok seems to have effortlessly shifted gear from the political protests that forced out Prime Minister Thaksin Shinawatra into celebratory mood, with tens of thousands of people armed with water pistols taking to the streets for this year’s festival.
Songkran, which commemorates the Buddhist New Year, is traditionally a time of renewal and involves pouring water over shrines and other people as a sign of cleansing.
But recently the festival has become a free-for-all water fight, when total strangers douse each other with water and spread white paste on their faces. For three days in Bangkok, people take to the streets armed with water pistols. END_OF_DOCUMENT_TOKEN_TO_BE_REPLACED

Bouncing back post-tsunami, Thailand is on a roll, with a booming economy, a flourishing arts scene, and an efficiently cosmopolitan capital. Giddy from cleaner air and new transport, Jamie James gets a contact high from Bangkok’s worldly buzz

Razzle-dazzle: At Sirocco, dine alfresco on the sixty-third floor of Bangkok’s second-tallest building, the State Tower, where Mediterranean cuisine and live jazz compete with glittering city views
Bangkok is one of the most heterogeneous, if not miscellaneous, cities in the world. Wandering down Sukhumvit Road, a main thoroughfare, in one block I passed a Kashmiri restaurant, a camping-gear shop, a diamond merchant, and a passel of friendly girls in red high heels in front of Pedro’s Bar before arriving at my destination, the California Wow Xperience, a popular exercise club. At the entrance, speakers aimed at the street keened and thudded with techno music. Directly underneath, two old women sat on camp stools, peddling lottery tickets and Buddhist amulets, while behind them a little girl sprawled on the sidewalk doing her English homework under a banner advertising a two-for-one membership promotion. END_OF_DOCUMENT_TOKEN_TO_BE_REPLACED