The Return of Very Thai

It’s over seven years since Very Thai, an encyclopedic guide to everyday culture, reshaped the way outsiders look at Thailand’s colourful brand of the mundane. 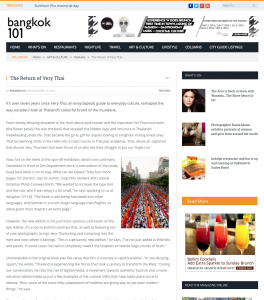 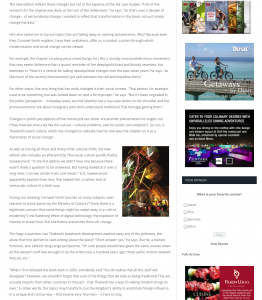 From whisky drinking etiquette to the truth about pink tissues and the inspiration for Thai truck bolts (the flower petal), this was the book that revealed the hidden logic and structure in Thailand’s freewheeling street life. That became the go-to gift for expats looking to enlighten visiting loved ones. That turned long stints in the toilet into a crash course in Thai pop academia. That, above all, captured that elusive Very Thai-ness that even those of us who live here struggle to put our fingers on.

Now, hot on the heels of the spin-off exhibition, which runs until early December in front of Zen Department store, a new edition of the candy-hued best-seller is on its way. What can we expect? Sixty four more pages, for starters, says its author, long-time resident and cultural historian Philip Cornwel-Smith. “We wanted to increase the type font and the size, which was always a bit small,” he says speaking to us at Bangkok 101 HQ. “The book is also being translated into other languages, and German is a much longer language than English, so we’ve given most chapters an extra page.”

However, the new edition is not just more spacious and easier on the eye. Rather, it’s a top-to-bottom overhaul that, as well as featuring lots of new photographs, brings Very Thai kicking and screaming into the here and now, where it belongs. “This is a genuinely new edition,” he says, “I’ve not just added in little bits and pieces. In some cases I’ve had to completely rework the chapters or rewrite large chunks of them.”

Unmistakable in the original book was the sense that this is a society in rapid transition. “In one dizzying spasm,” he wrote, “Thailand is experiencing the forces that took a century to transform the West.” During our conversation, he cites the rise of digital media, a movement towards authentic tourism and a more intrusive tabloid media as just a few examples of the cultural shifts that have taken place since its release. “Also, some of the more folky adaptations of tradition are giving way to just plain modern things,” he says.

The new edition reflects these changes but not at the expense of the old case studies. “A lot of the research for the original was done at the turn of the millennium,” he says. “So that’s over a decade of change – of extraordinary change. I wanted to reflect that transformation in the book, not just simply change the data.”

He’s also opted not to lop out topics that are fading away or nearing obsolescence. Why? Because even they, Cornwel-Smith explains, have their usefulness, offer us a conduit, a prism through which modernisation and social change can be viewed.

For example, the chapter on pleng phua chiwit (Songs for Life), a socially-consciousfolk-music movement that now seems littlemore than a quaint reminder of the deeplypoliticised and bloody seventies, has beenkept in. “Now it’s a vehicle for talking aboutpolitical changes over the past seven years,”he says, “as like much of the country themovement got split between the red and theyellow shirts.”

For other topics, the only thing that has really changed is their social context. “Thai tattoos, for example, used to be something that was looked down on and a bit improper,” he says. “But it’s been ungraded in the public perception… nowadays every second celebrity has a haa taew tattoo on her shoulder and the pronouncements are about foreigners who don’t understand traditional Thai heritage getting them.”

Changes in public perceptions of the motorcycle taxi driver are another phenomenon he singles out (“they have become a bit like the tuk-tuk – cultural emblems, safe for public consumption”). So, too, is Thailand’s beach culture, which has changed so radically that he now sees the chapter on it as a “barometer of social change”.

As well as tracing all these and many other cultural shifts, the new edition also includes an afterword by Thai visual culture pundit Pracha Suweeranont. “In the first edition we didn’t have one because there wasn’t really a question to be answered. But having looked at it over a long time, I can see certain traits and trends.” In it, Suweeranont apparently explains how Very Thai helped him, a native, look at vernacular culture in a fresh way.

During our meeting, Cornwel-Smith touches on many subjects: over-reaction to moral panics by the Ministry of Culture (“I think there is a legitimate concern that some things might be swept away in a rush to modernity”); the flattening effect of digital technology; the explosion of interest in street food. But one theme overarches them all: change.

This begs a question: has Thailand’s breakneck development washed away any of the grittiness, the allure that first led him to start writing about the place? “Short answer: yes,” he says. But he, a trained historian, also calls for long-range perspective. “I’m sure people would have given the same answer when all this western stuff was brought in by the aristocracy a hundred years ago: those awful, mutton-sleeved blouses, etc.”

“When I first released the book back in 2005, somebody said “You do realise that all this stuff will disappear? However, we shouldn’t forget that a lot of the things that we take as being traditional Thai are actually imports from other countries in the past – that Thailand has a way of making modern things its own.” In other words, the topics may transform, but the Kingdom’s ability to assimilate foreign influence in a unique and curious way – that elusive Very Thai-ness – is here to stay.

The new edition of Very Thai will be published in early December by River Books. Meanwhile, the exhibition continues in front of Zen Department Store until December 6.